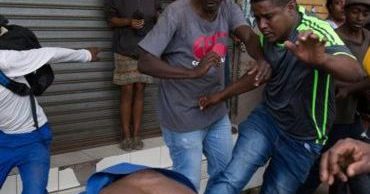 Kingsley Moghalu, a 2019 presidential candidate of the Young Progressives Party (YPP) has reacted to the attack on Nigerians in South Africa.

The widespread attack, which occurred late on Sunday, saw a group of violent locals suspected to be Zulu hostel dwellers besiege Jules Street in Malvern, Johannesburg, and looting and burning businesses.

Speaking with SaharaReporters on Monday, a handful of Nigerians in South Africa revealed how they now live in fear.

According to them, some victims of the attack, who visited the Nigerian Embassy for help and protection were denied entry into the place.

Former president of Nigerian Union South Africa, Iyke Anyene, told SaharaReporters that Nigerians had remained in the houses, afraid for their lives and unsure if they would be the next victims.

Reacting to the incident, Moghalu in a tweet (@MoghaluKingsley) on Monday, urged Nigerians to fight back.

“It’s time for serious reprisal by Nigeria over the killing of our nationals in South Africa. That’s the national interest that should guide all our foreign relations! Some strategic interests of South Africa in Nigeria should be squeezed,” he tweeted.

TBAN is a membership-based organisation and TBAN-USA is the US chapter of TBAN. This platform is designed and dedicated for Nigerians living in USA. Therefore, all Nigerians across ethnic, religious and partisan divides, residing in the USA are welcome to join this platform.